An event every week that begins at 7:00 pm on Wednesday, repeating until February 2, 2022 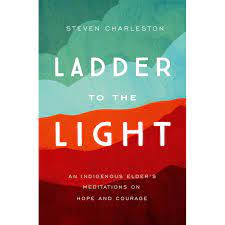 It is possible to see through both a Christian and Indigenous spiritual lens at the same time, and understand that the two world views don’t necessarily collide. Instead they can be integrated and thus enrich our spiritual lives in new and beautiful ways.

Join facilitator Janet Hardy for three Zoom sessions on Wednesday January 19, 26 and February 2 from 7 to 8:30 pm, to explore the writings of Steven Charleston in his book Ladder to the Light: An Indigenous Elder’s Meditations on Hope and Courage.  He is an elder of the Choctaw Nation of Oklahoma, the first of the Five Tribes from the southeastern part of the United States to be removed on the “Tail of Tears”. He is also a bishop in the Episcopal Church with forty years of service in the ordained ministry. Each rung of the ladder to the light contributes to a spiritual awakening – faith, blessing, hope, community, action, truth, renewal, and transformation. These rungs align with the seven Sacred teachings common to Canadian indigenous spiritual practices.

During our time together, we will explore the fundamental commonalities between indigenous and Christian spirituality, especially as it relates to the fundamental belief in the worth and equality of all life. As we awaken to the deep harms done to our indigenous peoples in the name of Christianity and colonialism, we can examine how we are more alike than different in our basic beliefs. Only then can we act from a place of knowing as we seek to make reparations.

Please register by January 10th by email to Janet Hardy.